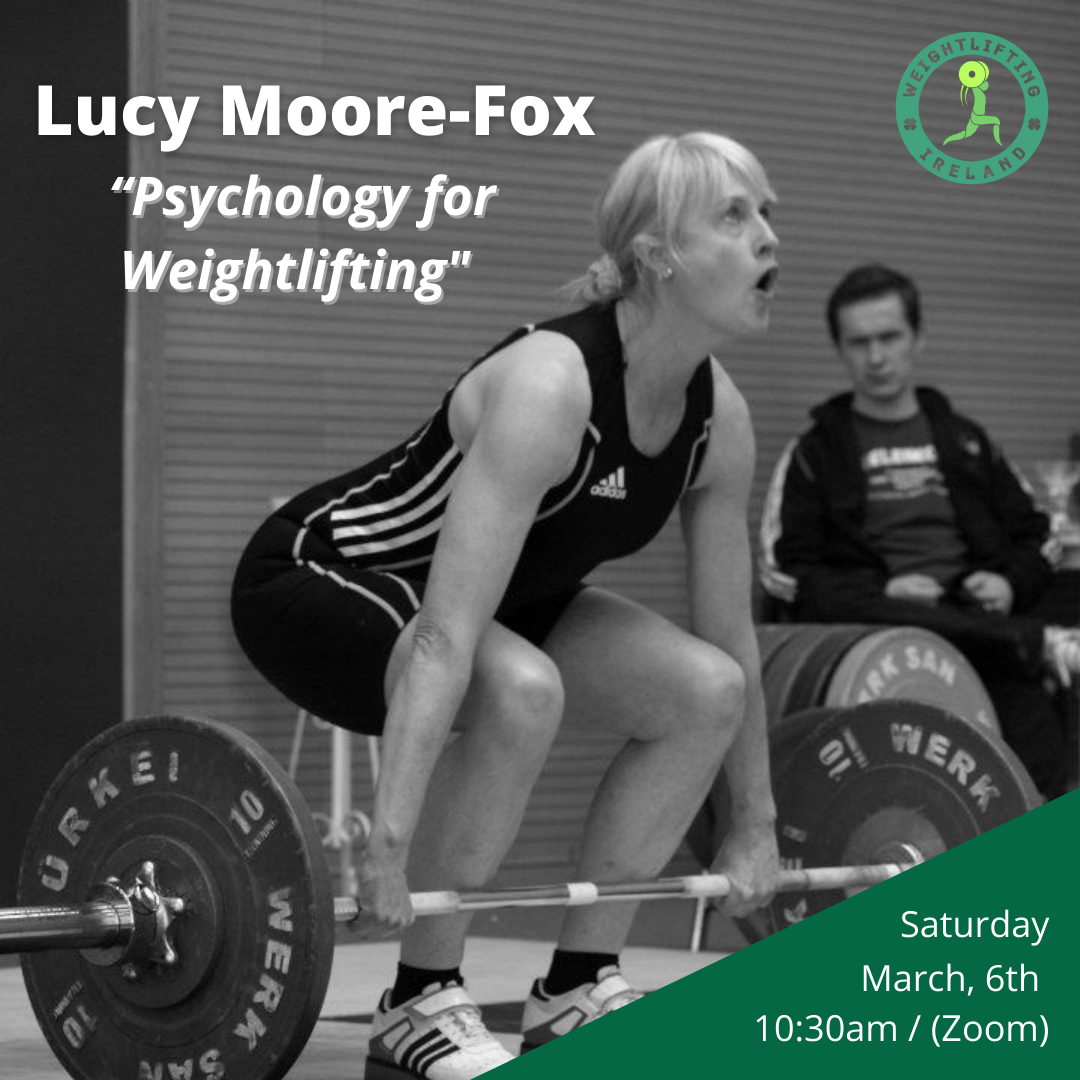 Introduction to Sports Psychology for Weightlifting

Dr Lucy Moore is a Masters athlete who competes in Olympic Weightlifting and Track & Field athletics.

She has been World Masters Champion in her age group in both Olympic Weightlifting and in the high jump. She has also won medals at World & European level in the triple jump, weight throw & hammer. Lucy has competed in weightlifting for the past 10 year but has been involved in athletics since the age of 13. She has represented Ireland at junior level in high jump & sprint hurdles and at senior level in heptathlon.

She captained the Irish Heptathlon Team at the Europa Cup. Subsequently she spent several decades acting as Team Manager, Coach or Psychologist to a variety of Irish athletics teams competing in European and World Championships. Lucy was National Event Coach for high jump for over 15 years.

She was also Head Coach for Dundrum South Dublin Athletics Club for many years. She coached David Gillick to European Indoor gold in the 400m but is best known for coaching Deirdre Ryan in the high jump. Deirdre became the first woman to qualify for the HJ finals at a major games. Lucy is a Level 3 athletics coach and a Level 1 weightlifting coach.

Lucy is the Principal Clinical Psychologist in a large community adult mental service in Dublin, where she has worked for the last 35 years. She also has a small private practice where part of her work involves mental skills training with a variety of athletes from a number of different sports.

This website uses cookies to improve your experience while you navigate through the website. Out of these, the cookies that are categorized as necessary are stored on your browser as they are essential for the working of basic functionalities of the website. We also use third-party cookies that help us analyze and understand how you use this website. These cookies will be stored in your browser only with your consent. You also have the option to opt-out of these cookies. But opting out of some of these cookies may affect your browsing experience.
Necessary Always Enabled

Any cookies that may not be particularly necessary for the website to function and is used specifically to collect user personal data via analytics, ads, other embedded contents are termed as non-necessary cookies. It is mandatory to procure user consent prior to running these cookies on your website.

SAVE & ACCEPT
Go to Top